In the most competitive world and business today, a highly challenging task is to keep their company on par with the latest technology and feature changes happening in the industry. This challenging task spreads across to each & every vertical of the business, and especially to the IT Teams. It becomes the highest priority for them to keep their IT systems and products used as up to date.

Oracle rolls out a new version of Billing and Revenue Management (BRM) product on a periodic basis to modernize current overall architecture, to improve the stability of the product, to enhance the product features to create new revenue monetization streams, and to stay compliant with Oracle licenses in the years to come. Apart from the various versioned releases of the BRM product, Oracle does release patches on periodic intervals to overcome, fix the technical, functional, performance issues on the product versions.

This blog is a quick one-stop document to brief the key highlights & basic process of performing a BRM Upgrade in a live system with near-zero downtime. The basic process briefs a bare minimum activity to be followed for any BRM upgrade projects. Explains:

Any billing system upgrade is challenging and the BRM system upgrade is not an exception. Primarily, due to the features available in the product and also the provision available to customize the product. Based on distinct unique requirements in the businesses and in the industries, the business teams, customize the BRM product based on their requirements, which increases the complexity in upgrading the BRM system. The more the product is been customized, the more the complexity involved in upgrading it. 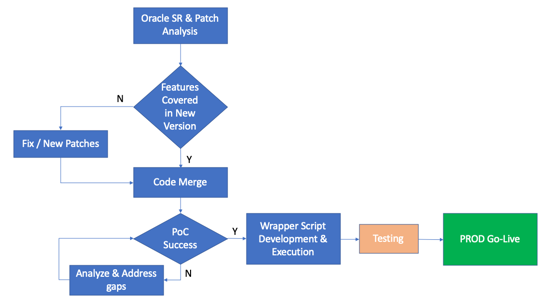 ●        Oracle SR & Patch Analysis:  – Oracle Support Requests (SR) raised for the current BRM system needs to be analyzed while performing the system upgrade. This becomes the most important activity in the upgrade, as some of the SR solutions would have been covered in the version release or in the specific patch of the BRM release.

●        Scripting: Build the script to automate the deployment into the pre-production and production environments. This will leverage avoiding the actual execution of the upgrade scripts and resolving the issues in every environment.

●        Testing: Once the BRM system is ready with the latest build plan for the functional, performance, regression, and End-to-End testing activities. Fix any issues faced in these testing activities planned. The fixes could be a direct code fix from our teams, or it could be from the actual product team of Oracle, depending on the criticality of the issue.

Once the DB server is ready, we shall leverage the benefits of Oracle Golden Gate (GG) to sync the data between the existing DB server and the new DB server. Once the GG lag is zero, then we shall break the replication for a time being. We shall do a complete upgrade in the new DB server, and after the upgrade, the GG replication can be initiated again in GG (upgrade mode) to sync the data from the old version of BRM DB to the new version of BRM DB

Later that, on the exact Go-Live date, the live traffic can be routed from the old server to the new server. To sync the data from the new DB server to the old DB server, we shall use the capabilities of the Oracle GG again in a downgraded mode to sync the data. Based on the overall performance and the stability, the BRM DB server in a lower version can be rebuilt with the latest version. Reading Industry1.0 journey and boarding till its version 4.0 could be long-drawn stories. The history of Industry 4.0 tracks the manufacturing industry from the industrial re... Covalense wins “Business Value Excellence Award” at Oracle CAB Asia 2018
READ MORE
Circles.Life would like to take this opportunity to acknowledge the close partnership that we’ve built with Covalense Digital Solutions (Covalensedigital) over the years. We appreciate the many services that have been provided, and would like to thank Covalensedigital for being part of our growth story. As Circles.Life continues to work on giving power back to customers, we see Covalensedigital as a valuable technology partner and look forward to the team’s support.
- Changez Khan
Head of Network Engineering

Covalensedigital is engaged as part of our ambitious 4G Billing transformation project. Covalensedigital demonstrated in-depth knowledge in Oracle Communications stack of products. We are extremely happy about the progress made in the current implementation and migration phases of the project and look forward for long term working relationship.
- Eric Chen
Director of IT

Covalensedigital has been a preferred partner for Intuit since 2014. Covalensedigital has assisted Intuit immensely for launching Intuit's subscription monetization platform for SAAS and other product offerings in North America, Australia, Europe and other Global Markets successfully. We commend and appreciate Covalensedigital's in-depth domain and technology expertise. With their thorough understanding of Intuit's business needs, Covalensedigital excelled in delivering applications, assured quality and application support services with highest professionalism. We are delighted to engage Covalensedigital at Intuit and we look forward for many more years of business association.
- Balajee Sundaram
Director

Covalensedigital has been associated with Viva for the past 3 years in multiple projects. They have delivered successfully in all the projects across end to product stacks with Siebel CRM, OSM, AIA & OBRM. Covalensedigital SMEs have been instrumental in delivering the BRM upgrade project and we continue to engage them for advisory services as part of enriching the product stack. As part of the production support team, they have optimized rating and billing performances and continue to support critical activities. We look forward to a long-term engagement with Covalensedigital.
- Hicham Badaoui
Director of IT The Csmart DM platform is a revolutionary digital marketplace built on a cloud-native stack that brings together... Covalensedigital Earned Designation as a Great Place to Work...

For the second time in a row, we are proud to be officially certified by Great Place to Work... It’s been more than 9 months since the first lockdown, and Covalensedigital is proud to announce that our...

Agile and DevOps - contradictory or complementary TaaS, Testing as a Service Platform

We are happy to collaborate in creating a win-win proposition